Altruism could regenerate the practice of medicine. So says Matthieu Ricard, molecular genetics expert, Buddhist monk and the French interpreter of the Dalai Lama.

The latest book by the singular Matthieu Ricard, Advocacy for Altruism, is the culmination of years of discussions with scientists, philosophers and economists. Addressing today's financial, social and environmental crises, the doctor in molecular genetics posits a new way of thinking whereby each one of us is capable of – and stands to gain from – cultivating altruistic love.

IN VIVO In your book, you say that “altruism is not a luxury but a necessity.” So should we encourage the teaching of altruism?

Matthieu Ricard It would seem natural to teach people whose work consists in helping the suffering about altruistic love and compassion. The training would also help the loved ones, parents, children and partners of the ill and disabled who take care of them.

MR I once talked to a nurse who, like most of her colleagues, is continually confronted by the suffering and problems of her patients. She told me that the new training courses for care staff where she works focus on the “need to keep an emotional distance with the ill” to avoid classic burnout. Then she said, “It's funny, I feel like I gain something from taking care of the suffering, but when I talk about that 'gain' with my colleagues, I feel a bit guilty about feeling something positive.” In contrast to empathy fatigue, love and compassion are positive states of mind that strengthen our inner capacity to cope with the suffering of others.

IV What do you mean by “positive states of mind”?

MR I certainly don't mean that observers consider suffering as acceptable. Instead, they react to suffering through constructive mental states such as courage, motherly love, a feeling of connection, and the determination to find a way to help, rather than “negative” states of mind, which tend to lead to distress, aversion, discouragement and avoidance.

IV What about healthcare professionals?

MR The medical studies curriculum makes virtually no mention of the word “compassion” and has even less to say about how to cultivate it, despite the fact that kindness and compassion are an integral part of the ideal of medicine, the Hippocratic Oath and the code of ethics. Medical students and young doctors starting out at hospitals are more often subjected to draconian workloads, often working 24 hours non-stop with patients.

Obviously there are countless doctors, nurses and caregivers around the world who dedicate themselves tirelessly to the wellbeing of others with admirable devotion. But to reduce burnout on the part of healthcare professionals, and to keep the human in a profession that is all about humanity, it would be useful to provide the people concerned with the resources for developing the inner qualities they need to better care for others. If caregivers were able to cultivate compassion and integrate it in current hospital practices, patients would feel better cared for and doctors and nurses would gain more satisfaction from their work and a better emotional balance.

“To reduce burnout on the part of healthcare professionals, and to keep the human in a profession that is all about humanity, it would be useful to provide the people concerned with the resources for developing the inner qualities they need to better care for others.”

IV Technology is playing an ever greater role in hospitals and care institutes. Doesn't it create a distance between patient and caregiver?

MR Machines in themselves can only be a good thing in that they help to better identify and treat illnesses. Technology today can work wonders. But the use of high-performance instruments should naturally not relegate to the background the benevolent presence of doctors and caregiving staff that is essential for the patient.

IV Your book also establishes a clear distinction between altruism and empathy.

MR Yes. Empathy should not be confused with altruistic love and compassion, which is the desire to remedy suffering and its causes. Empathy is a warning sign that informs us about other people's situation. It's an emotional resonance, whereby if the other is joyful, you feel that joy, and if the other is suffering, you are marked by that suffering. It's also a cognitive experience, one in which you imagine what the other is feeling or what you would feel in their place. But empathy in itself is not enough. If you let yourself suffer from the suffering of the other, day after day, month after month, you will quickly fall prey to emotional exhaustion and burnout. A study carried out in the United States showed that 60% of caregiving staff suffer or have suffered from burnout and that one-third of them are so affected that they have to temporarily stop work.

The medical studies curriculum makes virtually no mention of the word “compassion”.

MR Depending on the circumstance and the individual, empathy can be about concern and stir the desire to meet the needs of others, or it can trigger a distress that focuses our attention on ourselves and turns us away from the other. For this last reason, empathy alone is not enough to engender altruism.

IV How do we reach that state, then?

MR There remains compassion, the essence of which is an altruistic motivation, necessary and sufficient to make us desire the good of others and give us the determination to make that happen through action. Compassion is being aware of the situation of the other, accompanied by the desire to relieve their suffering and bring them wellbeing. Last of all, it does not fall prey to confusion between the other person's emotions and our own.

IV Several studies, which you have taken part in, have scientifically demonstrated these differences.

MR That's right. Tania Singer, director of the Max Planck Neuroscience Institute in Leipzig, and her colleagues carried out a longitudinal study, a project called “ReSource”, aimed at training for one year a group of 400 volunteer novices on a range of emotional and cognitive abilities, mental abilities including empathy and compassion. A preliminary study already showed that for most people, the empathy felt in the face of the other person's suffering is systematically correlated with entirely negative feelings – pain, distress, worry, discouragement. The neural signature of empathy is similar to that of negative emotions.

IV While altruism is correlated with positive feelings?

MR The initial results show that after one week of meditating on altruistic love and compassion, the participants reacted in a much more positive and caring way to video clips showing people suffering.

In contrast to empathy fatigue, love and compassion are positive states of mind that strengthen our inner capacity to cope with the suffering of others.

IV Are there any other fields in which altruism could be beneficial?

MR The environment is of particular concern for us, for our children and descendants, and for all beings, human and animal, now and in the future. Despite the complexities of the issue, it can be summed up in the opposition of selfishness and altruism. If we have any consideration for the lives of future generations, we cannot wreak this much damage on the planet we are going to leave to them. They will tell us, “You knew it but you didn't do anything.”

Similarly, if we had more consideration for the quality of life of those around us, we would seek to improve their work, family and social conditions, and many other aspects of their existence. In particular, we would do all we could to find a solution to the precarity that exists side by side with wealth.

IV You also condemn the excesses of free trade and favour an economy that is responsible to others.

MR If investors had more consideration for the good of others, they would not gamble with the savings of people who placed their trust in them with the aim of reaping the highest dividends at the end of the year. They would not speculate on food, seeds, water and other resources that are vital to the survival of the poorest populations.

Look at the crisis! Isn't it an exacerbation of personal interests, entirely self-absorbed? Wasn't it triggered by greediness, unchecked speculation and sub-prime manipulations? It all resulted from the reductionist, dehumanised view of human beings held by Homo economicus. Wouldn't it be better to foster the emergence – in ourselves and in society – of Homo altericus, a person who builds their happiness with other people in mind, based on solidarity and concern for others? Altruism is the common thread that will help us find our way in this labyrinth of serious and complex worries. 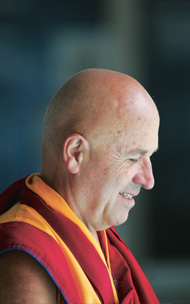 Matthieu Ricard, born in France in 1946, is the son of Jean-François Revel, a philosopher, journalist and member of the Académie Française, and the painter Yahne Le Toumelin. He completed his Ph.D. in Molecular Genetics at the Pasteur Institute under the direction of the Medicine Nobel Prize winner, François Jacob. Fascinated by Tibetan Buddhism, he studied with renowned spiritual leaders and settled definitively in the Shechen monastery in Nepal, where he has now lived for 40 years. He has been the French interpreter for the Dalai Lama since 1989 and has published numerous translations of Buddhist texts and books translated into more than 20 languages.

Altruism is the common thread that will help us find our way in this labyrinth of serious and complex worries.”