Serious games are increasingly used by patients and health care professionals. More serious games are being developed in Switzerland, with the support of the country’s hospitals and leading schools.

In a fictitious town, Alex London is conducting an investigation. He has to find the kidnapped scientist Professor Birman. Clues keep coming, while the hero, a diabetic, has to monitor his blood sugar throughout his adventure. This video game, called The Birman Affair, available from the online platform Gluciweb, is an educational tool designed to support patients in managing their insulin therapy. Players have an insulin pen, a glucose meter, a sugar reserve and different snacks.

Diabetic patients learn about their own treatment by managing their character’s blood sugar through the story.

The Birman Affair is what is called a “serious game”, a programme that uses the context of a game to reach a serious objective, such as educating or informing players. “Serious games have been around for many years, especially in management, but they’ve only recently been applied to medicine,” says Dominique Jaccard, director of the research team at AlbaSim, a laboratory at the School of Business and Engineering Vaud (HEIG-VD) that develops a variety of serious games.

“It took a while for the appeal of using entertain- ment to gain ground in health care due to preconceived notions. Many people have trouble associating games with a serious purpose.”

“Our students are digital natives. They love these types of programmes, which they find stimulating and motivating.” The software is used to confront students with real-life situations of their profession through virtual representations. Pulse!!, the leading American game, was one of the first serious games for health care professionals in which future doctors have to make the right decisions to save a virtual patient’s life.

The La Source school currently uses a serious game on clinical cardiac evaluation developed jointly with the AlbaSim laboratory. A virtual simulation forces the player to deal with a patient who comes to the Accident and Emergency department with chest pain. “The programme aims to develop the ability to care for the patient holistically,” says Dominique Jaccard, the laboratory director. “The player can ask the patient questions and run tests, and then determine what action to take.”

The use of entertainment has also proved beneficial for patients. They get more involved in their treatment and more serious about taking it. “We’re currently seeing a change in paradigm,” says Dominique Truchot-Cardot. “Patients want to take an active role in their health and be independent with their care. Health care professionals need to adapt to that demand and integrate it into their practices.”

UNDERSTANDING THE FIGHT AGAINST CANCER

“That Dragon, Cancer” is a game developed by Ryan Green based on his young son Joel’s fight against cancer. This serious game explores Joel’s day-to-day experience in dealing with the disease and the hardships his family faced with him. The player has to react in a series of scenes, interacting with doctors, nurses and members of Joel’s family to help him during his treatment. The project was developed based on a text by Amy Green, Joel’s mother, written to explain her son’s disease to her four young boys. The Green family wanted to help patients and their loved ones going through the same turmoil to better understand and live with the disease.

Many of these “serious” video games target young patients with chronic diseases, such as diabetes or psoriasis, to help them better understand their treatment and live with their disease day-to-day. These games are often available online or can be downloaded, making them ideal for self-man- aging their treatment. Most games feature the option of compiling the player’s treatment behaviour, which can then be exported to their medical practitioner. Serious games are not just for children. Many are also designed for adults and the elderly, with many programmes developed to prevent falls.

MOVING INTO THE MAINSTREAM

Some games initially designed without a “serious” purpose are then adapted to achieve a therapeutic goal. The Wii Fit Board, an accessory for the Nintendo Wii console, has turned out to be useful in motor-skill rehabilitation. Lara Allet, a physiotherapist and researcher at the University of Applied Sciences (Haute école de santé) in Geneva, studied how this tool could be used to recover from ankle sprains and prevent future

ankle injuries. “The Wii Fit Board features several games that are effective in rehabilitation,” she says. “It can be used to vary exercises and better motivate some patients. But it’s only a tool. Recovery requires medical treatment and the Wii Fit Board can’t substitute that.”

Most serious games available have been developed abroad. This can sometimes be a problem, especially when patient care rules and procedures di er from one country to another. Some games can’t be used in Switzerland. But more Swiss games are being developed. “Technology is advancing, and development costs are falling. Costs are now one-fifth of what they used to be ten years ago,” says Dominique Jaccard. “The development of serious games will grow.” The games available today are expensive and under licence, “but they’re moving into the mainstream,” says Dominique Truchot-Cardot. Switzerland’s hospitals and specialised schools are beginning to develop their own serious games to improve medical training, treatment and patient care.” ⁄

​EVERY GAME HAS ITS “SERIOUS” PURPOSE

Different types of serious games are used in health care: 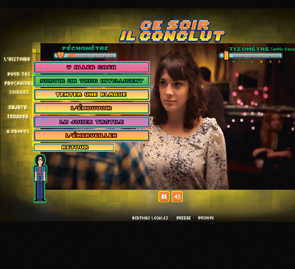 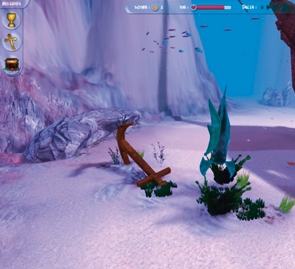 “Voracy fish”,
a fun rehabilitation programme for stroke victims. The main character is a little fish guided by the player’s arm. 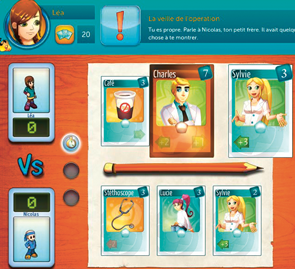 Immerse the player in a virtual environment to deal with a situation from the real world.

“Ludomedic” immerses the patient in a hospital environment. 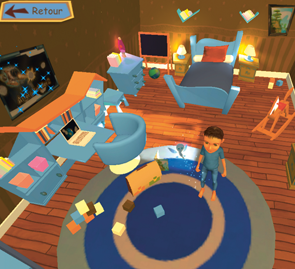