A new generation of electronic chips, when placed under the skin, are designed to release hormones or drugs by remote control. Technological and medical revolution, or just another gadget?

Contraceptive microchips implanted under the skin, which can be switched on and off using a wireless connection, could hit the market soon. The US start-up behind the project, MicroCHIPS, has recently completed a series of tests on its implant.

“If we can adapt it to different treatments, it would represent a real breakthrough for people who need to take medication regularly, which often presents a burden, especially for the chronically ill”, says Pierre Voirol, head pharmacist at the Pharmaceutical Assistance and Clinical Pharmacology Unit at the CHUV.

Founded by researchers from the Massachusetts Institute of Technology (MIT), MicroCHIPS has received $4.6 million in funding from the Bill & Melinda Gates Foundation. Microsoft’s founder is looking for ways to provide women in the poorest countries with contraception that would last longer than the implants currently available and that could be deactivated if the user wished to conceive.

Although the contraceptive microchip is not yet available on pharmacy shelves, this type of high-tech device is already used in sensors placed inside and outside the body to monitor a patient’s condition. An example is the Helius sensor designed by the US company Proteus Digital Health. The Helius ingestible sensor is swallowed with medication and communicates with a patch worn on the skin. The information collected can then be transmitted to a smartphone, tablet or computer. The internal sensor is activated by gastric fluids. The system checks whether the patient is truly taking their medication and determines whether or not the treatment is effective. The whole procedure is more accurate and efficient than doctor visits, as data is collected constantly.

Meanwhile, Novartis has recently signed a partnership deal with Google to develop smart contact lenses. The technology would be used by diabetics to track their blood glucose levels by measuring tear fluid in the eye. This offers them a simple and non-invasive way of keeping closer tabs on their disease.

The market research firm IDTechEx forecasts that this type of technology will develop into a market representing $70 billion by 2024, up from $14 billion today.

In ingestible tablets, skin patches or in clothes or shoes (smart fabrics), these digital devices are designed to monitor a person’s condition and understand their reaction so that they can receive better treatment. The market research firm IDTechEx forecasts that this type of technology will develop into a market representing $70 billion by 2024, up from $14 billion today. IDTechEx also believes that companies specialised in these technologies will eventually become as big as pharmaceutical groups. Companies like Google will also play a key role in gathering medical data. The US giant has recently launched an ambitious experimental project to present a standard of what a healthy human being should look like. Google’s “Baseline Study” will be harvesting genetic and molecular information provided by anonymous volunteers over the next few years.

The company MicroCHIPS plans to launch its digital pill by 2018. As of now, the microchip has not been rejected by the human immune system once implanted under local anaesthesia. MicroCHIPS hopes to be granted approval by the US Food and Drug Administration to launch clinical tests on its medicine in the months to come.

Ingestible sensors: how do they work? 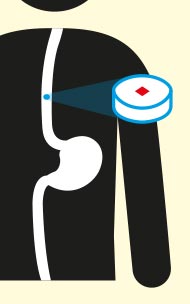 The Proteus sensor is activated when swallowed and records that the patient has taken their medication. 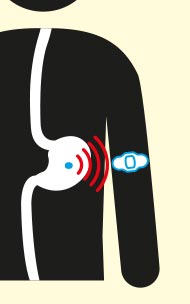 The device is powered by stomach fluids, and transmits the data collected to a skin patch. 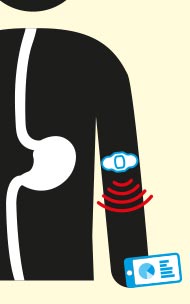 Using a Bluetooth connection, the patient can use the application provided with the sensor to check and analyse their data.