At the end of the 19th century, this nurse forever changed the history of medical care by analysing data from her patients.

“The only English patients I have ever known refuse tea, have been typhus cases; and the first sign of their getting better was their craving again for tea.” Florence Nightingale paid close attention to these little signs, described in her book Notes on Nursing. This British nurse, who lived from 1820 to 1910, practised in her lifetime what the 21st century refers to as data management: harvesting and studying patient data to improve the quality of care.

She was also a statistician, who served at the military hospital in Scutari (now the Üsküdar districtof Istanbul) during the Crimean War (1853 to 1856). Faced with horrendous sanitary conditions and poorly kept medical records, she organised records, collected and analysed data. Her painstaking work reduced the death rate at hospitals during the war from 42% to 2%. 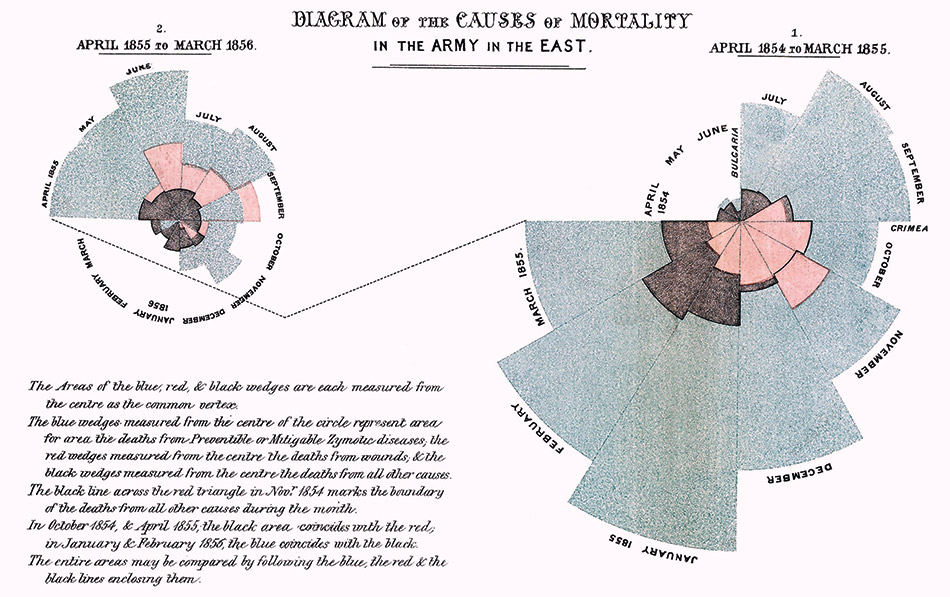 After her return to England, with the support of Queen Victoria, she continued her work analysing data by leading the Royal Commission on the Health of the Army. She drew important conclusions on soldiers’ causes of death. To make sure that the statistics could be understood by members of Parliament and that measures would be taken, she presented them in the form of charts (see above).

Florence Nightingale’s dedication and meticulous data analysis led to major reforms. The “Lady with the Lamp”, referring to her night-time rounds visiting patients, is now widely considered to be the founder of epidemiology (the study of health and disease conditions of populations) and of modern nursing.

Faced with horrendous sanitary conditions and poorly kept medical records, Florence Nightingale organised records, collected and analysed data. Her painstaking work reduced the death rate at hospitals during the war from 42% to 2%.