Do you remember? In 2018, a discovery by a collaborative team from Lausanne University Hospital (CHUV) and Ecole polytechnique fédérale de Lausanne (EPFL) made the headlines: researchers had succeeded in helping paraplegic people to walk again. This spectacular advance resulted from several years of research, led by CHUV neurosurgeon Jocelyne Bloch and EPFL neuroscientist Grégoire Courtine, both in their forties. Their innovative treatment is based on a system of electrodes that deliver electrical stimulation to a patient’s damaged spinal cord, thus reactivating communication between the brain and the muscles of the lower limbs. This project is called Stimo (see side infographic).

The story begins like this: after arriving from Los Angeles, Grégoire Courtine spent a few years in Zurich developing a device to help paralysed rats to walk again. When he was ready to transpose the system in humans, he knew that he had to work with people from hospital research to move forward. He first approached EPFL and presented his project to Patrick Aebischer, at the time head of the school. “He spoke to me about Jocelyne Bloch, describing her as a dedicated clinician, a neurosurgeon with magical hands,” Grégoire Courtine says. The two experts got on instantly. “We share the same proactive personality and drive to move fast, sometimes very fast,” he adds. That is how, in 2013 Grégoire Courtine, freshly arrived in Lausanne, embarked on ambitious projects with Jocelyne Bloch.

Since completing her degree in neurosurgery in 2004, Jocelyne Bloch gained a decade of experience as a researcher and practitioner. She is known as a leading figure in the field. Her two children were about 10 years old at the time. “My husband and I organised our lives as all parents do, as best we could, accepting a certain amount of chaos and extra fatigue. I was never afraid to delegate parenting tasks; we had help at home.”

1/ BEING A DOCTOR AND A RESEARCHER

As head of the functional and stereotactic neurosurgery programme at the CHUV, Jocelyne Bloch balances research work, patient care and teaching. For her, these different roles feed off each other. “Neurosurgery is a very research-driven discipline,” she says. Neurosurgery is a great example of translational research, which refers to research that takes scientific questions and works until it finds a concrete application, such as a treatment, medical device, or new technology.

Performing actual surgical procedures, such as removing a brain tumour or herniated disc, represents only a small part of Jocelyne Bloch’s work. Her favourite part of her job is to study how to enhance functions of the nervous system. Her current work ranges from improving movement for people with Parkinson’s disease to how to alleviate chronic pain or epileptic seizures that are resistant to drug treatment. As far as repairing brain and spinal cord injuries, there is still so many possibilities to explore. “That’s what I love about this field. There are always new things to invent,” she says enthusiastically.

In 2019, Jocelyne Bloch and Grégoire Courtine created their own research centre, NeuroRestore, where several projects are conducted simultaneously to improve motor coordination in both the lower limbs (including the Stimo project) and upper limbs, to take into account the realities of hemiplegics, and enhance movement for Parkinson’s patients and stroke victims. The Stroke project (see inset on p. 23) involves the biologist and neurosurgeon Jean-François Brunet, who has been working with Jocelyne Bloch for nearly 20 years. “When we started working on non-human primates, we complemented each other amazingly,” he says. “I am the creative scientist who looks everywhere, and she is the neurosurgeon who sets up a pragmatic model. She also has the viewpoint of a clinician; she tries to apply things to the patient. Meanwhile, I bring answers by working on the details.”

The NeuroRestore centre now has more than 50 professionals. Many of them are engineers, but also doctors from different fields, physical therapists, and an entire team of administrative staff. “We each bring fundamental knowledge related to the other part of the group,” Jocelyne Bloch says. “I am nothing without them, and they also need me. Complementarity is essential in conducting such cutting-edge research.” The group’s strength stems from the wide range of expertise. Young researchers are hired for their skills, especially in computer coding, which the generation of the centre’s co-directors does not possess.

“The group works in an atmosphere like nowhere else,” Jocelyne Bloch says. “Grégoire Courtine and I are very dynamic and act fast. Everyone has to have that same attitude to be part of the group.” The centre’s co-directors want to make their staff members feel proud of being part of the projects being led, with the desire to do things well and quickly. “I believe it is our role to instil a culture of efficiency,” she says. “But to do that, you need to have a vision, a goal, a purpose. You can’t do a PhD on these projects just to get a degree.” Jocelyne Bloch believes that the motivation clearly felt throughout the team is also because its projects produce plainly visible results: high-level publications, massive funding that enables them to pursue their work, not to mention the encouraging progress of the people being treated over the course of clinical trials.

3/ WORKING AS A TEAM

Once laboratory research shows enough promising signs for a project, researchers move on to the clinical trial phase (see timeline). This phase involves testing a new treatment or medical device on a volunteer patient who is of course prepared for the procedure ahead of time.

Individuals from several disciplines can work together in the same operating room: specialised medical staff, engineers, nurses and sometimes even people from the medical industry (see infographic). This collaboration must be carefully planned. It is the result of a long preparation, with work organised into in sub-groups that meet regularly. “We all have different backgrounds, but the fact that we sit around a table and talk frequently allows us to understand where we are going,” Jocelyne Bloch explains. “Each specialist speaks with a very specific vocabulary related to their own expertise,” Grégoire Courtine adds. “Our role is to translate the work from each side,” he explains. 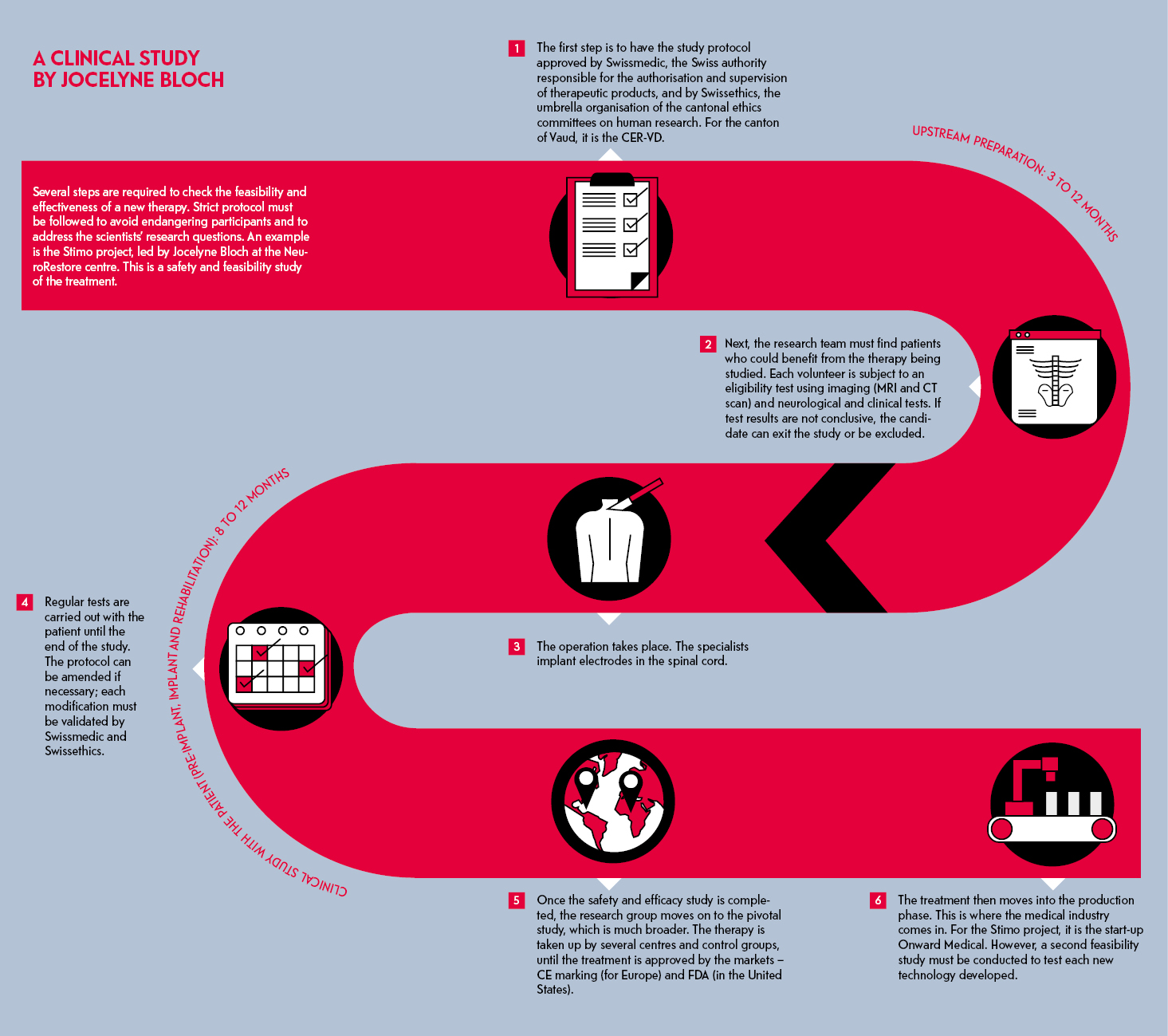 4/ FROM RESEARCH TO INDUSTRY

In 2018, the discoveries made by Jocelyne Bloch and Grégoire Courtine, and the ensuing media coverage, brought the project strong support. EPFL, CHUV-UNIL, SUVA and the Defitech Foundation (created by Sylviane and Daniel Borel, the founder of Logitech, who is keenly interested in the project’s technological aspects) provided the funding needed to pursue the research. But the group couldn’t stop there. “If we want to leave a mark on Earth, a discovery must eventually be turned into a treatment. We have to think about its large-scale application right away,” says Jocelyne Bloch.

And that’s where industry comes in. The research group initially worked a lot with Medtronic and is still working with the company today. But electrical stimulation is not the multinational’s speciality. To develop technology that could perfectly suit its needs, the NeuroRestore centre had to start its own company. And so they founded GTX Medical (recently renamed Onward Medical) in 2014.

In conducting research, funding is always the most complex aspect of the process, Jocelyne Bloch says. “You get funding as soon as you become credible as a researcher,” she says. Credibility is first earned by coming out with good publications. That takes a lot of work, step by step, over many years. “You have to prove yourself early in your career. To stand out from the rest, you cannot count your hours, and be lucky enough to find a good team that can provide effective support and guidance,” Jocelyne Bloch says.

With teamwork, a multidisciplinary approach and a vision of excellence, medical research can reach new heights. “Clinical research remains very important today, but the risks in healthcare have become so complex that research must become more professional,” says Jean-Daniel Tissot, director of the Department of training and research at the CHUV and Dean of the Faculty of Biology and Medicine at the University of Lausanne (UNIL).

The way forward is in terms of responsibility, which is changing. “We no longer work on, but with patients during clinical studies,” he says. Communication must be improved so that patients have all the information they need to make informed decisions. Lastly, if a study produces findings that are deemed negative, it should be published, Jean-Daniel Tissot points out, the same way as tremendous progress. As such, we can avoid reproducing inconclusive experiments.

All medical education programmes teach students about the challenges of research. Established practitioners can benefit from incentives to help them continue their research work, including the Pépinière grant. “This grant aims to support researchers who have reached an intermediate stage in their career and want to transition to academics, but are having difficulty to do so because their clinical work takes up too much of their time,” explains Jocelyne Bloch, who chairs the grant selection committee. The department where they work pays 50% of their salary and the grant covers the other half. This initiative supports two or three researchers each year.

6/ THE ROLE OF WOMEN

Jocelyne Bloch’s career path is impressive in more ways than one: combining cutting-edge research projects with other high-flying experts, she is also a woman who has succeeded in breaking through a highly male dominated environment. At the CHUV, women make up the majority of students and residents (59%), but only 29% of senior physicians and 16% of chiefs of service. “A generational change is taking place,” says Jean-Daniel Tissot, Dean of the Faculty of Biology and Medicine at UNIL. It’s wonderful to see that we’re receiving more and more applications from women for senior positions.” The Faculty of Biology and Medicine has set up an equal opportunity – diversity – integration commission to encourage women and non-Europeans to apply for positions of responsibility.

The CHUV also provides financial support for women, especially those who have given birth, which means a doctoral student can be hired to continue research in their absence. “We do everything we can to improve the working conditions of women at our institution,” Jean-Daniel Tissot says. “We are also seeing changes among men. Some of them are also asking to reduce their working hours. We are going through a real social change.”/

“Onward medical – formerly GTX medical, the company founded in 2014 by Prof. Jocelyne Bloch, Prof. Grégoire Courtine and other professors at EPFL – was floated on the stock market on 21 October, on Euronext in Brussels. The purpose of the medtech firm is to develop electrodes and neurostimulators aimed primarily at paraplegics, not only to help them walk again but also improve other neurological function disorders. Neurosurgeon Jocelyne Bloch and Prof. Courtine each have a small stake in the new company.”

Percentage of women residents at the CHUV

Senior physicians who are women at the CHUV

CHUV Chiefs of service who are women

Teamwork to implant electrodes on a patient in the Stimo study. In total, 15 to 20 people are present.

1/ Nurses prepare the patient. The anaesthesiologist puts the patient to sleep before the operation. Jocelyne Bloch operates.

2 Doctors specialised in neurology are in charge of neuromonitoring. They observe brain and nervous system function during the operation.

3/ Engineers take care of brain mapping during surgery to find or decide the best way to implant the electrodes. This involves recording how muscles react to stimulation and thus determine where precisely to place each electrode.

4/ Specialists from the medical industry (Medtronic at first, and Onward Medical for the last three patients) observe the procedure to understand how the device works.

Basic research is, in a way, pure science. It aims to understand mechanisms and reactions in the human body, for example diseases for which there is no treatment yet. This form of research takes place in the laboratory.

Applied research involves developing treatments or medical devices that can be administered to patients to improve their well-being.

Translational research covers the intermediate phase between these two areas, i.e. the medical application of findings from basic research.