The promises of phage therapy

Grégory Resch, project director of the Fundamental Microbiology Department at UNIL, participated in the PhagoBurn project, the first clinical trial on phage therapy. With funding from the European Union, the trial sought to evaluate the effectiveness and tolerance of bacteriophages in the treatment of infected wounds in severely burned patients. “It was the first such study in the world. The clinical trials were conducted in France, Belgium and Switzerland in accordance with Western best practices,” he says.

PhagoBurn ended in late June 2017, and the results will be published by the end of the year. Resch hopes the experiment will pave the way to the widespread use of this promising technique in the next few years. “Phage therapy can also be used in conjunction with antibiotics,” says the researcher. “We observed a synergistic effect with the two treatments.” Phage therapy also stands out due to its lack of side effects. “We are in constant contact with bacteriophages. They are 10 to 100 times more numerous than bacteria. For example, there are billions in Lake Geneva alone,” says Resch.

The fundamental microbiology researcher is getting ready to take part in another clinical trial on phage therapy. It is being funded by CHUV and UNIL and will take place over a period of five years. This time, phages will be used to treat people with cystic fibrosis. 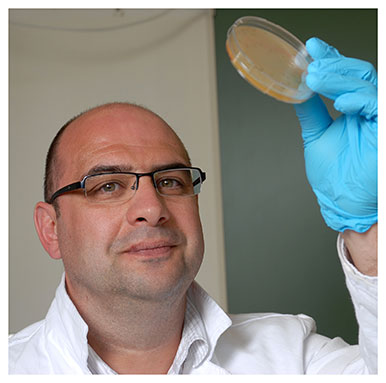