Today, surgical procedures can be performed on foetuses without opening the mother’s stomach. In this article, we look at foetal laser surgery, as impressive as it is revolutionary.

The eyes of everyone in the room are transfixed on a small screen. For the novice, what appears on the monitor looks like underwater diving in a hostile environment. We can hardly see anything or tell up from down in the strange cavity stretching before our eyes. As if the sight itself were not odd enough, at the bottom of the screen we can see a small rod moving about. It seems to be erasing a network of faint blood vessels along the edges of the mysterious cavern.

The first operations have been performed to treat tumors in utero or correct urinary and cardiac blockages in foetuses.

Suddenly, a hand appears. A tiny, fragile hand, still covered in the soft, downy hair that only humans have before they leave their mother’s womb. And a bit further, a head, then another, as if floating amid the surreal setting. Then we finally realise, while watching this amazing scene take place before those closed eyes, what we’re marvelling at. It’s the inside of a uterus and two lives that are slowly taking shape in the placenta. This field is called in utero laser surgery, a speciality unlike any other.

David Baud, a physician at the Department of Obstetric Gynaecology at the Lausanne University Hospital (CHUV),performs operations like this one just over twenty times a year. Most often, he teams up with Switzerland’s second specialist in the field, Luigi Raio, from the Bern University Hospital.

The two hospitals have been working together closely in this cutting-edge surgical procedure to treat tiny patients from all over Switzerland and other European countries. “More than 90% of the time, we treat cases of twin-to-twin transfusion syndrome (see inset),” says David Baud. “These are most often emergency procedures, once the syndrome has been diagnosed by a gynaecologist. We can operate as early as the 14th week of pregnancy, but it’s not easy because the foetuses are tiny,” the expert says. “But later in the pregnancy, the amniotic fluid becomes naturally cloudy, and that seriously complicates our work.”

Once the diagnosis has been made, there is no alternative to surgery. Twin-to-twin transfusion syndrome has a risk of mortality of more than 90% for both babies. Until the 2000s, that meant certain death. At best, one twin would survive, but with the risk of serious neurological damage.

Things significantly improved with the development of fetoscopic surgery. Today, the outcome is favourable for both foetuses 70% of the time and for at least one of the babies 90% of the time. “Once the operation is over, there’s always a risk of the water breaking or the uterus contracting and causing premature labour.” Thanks to technological advances in the 2000s, an efficient and lightweight device was developed combining the laser beam, camera, light source and water injection all within a diameter of barely two millimetres.

But this is only the beginning of foetal surgery. The first operations have been per- formed to treat tumours in utero or correct urinary and cardiac blockages in foetuses. These initial trials – in which David Baud’s team participated – suggest a whole spectrum of new possibilities to improve, or save, the lives of those who have not yet been born. ⁄

David Baud of the Lausanne University Hospital (CHUV) and Luigi Raio of the Berne Inselspital, have succeeded in a remarkable undertaking together, bringing about the regression of a life-threatening lung tumour in an unborn child.

On this occasion, the challenge was considerably more demanding. The heart of a foetus of less than six months gestation was compromised by a lung tumour, leaving the baby no chance of survival. On February 22, 2016, after intensive discussion with the parents, two surgeons decided to commit to the operation, a last chance for the unborn patient.­

Guided by ultrasound images, they used a laser to cauterise the blood vessels supplying the tumour. The surgery was particularly difficult given the location of the tumour within the body of the foetus, just 1–2 millimetres from the heart and aorta—but was nonetheless successful! The tumour was absorbed, the heart returned to beating normally and the healthy lung took over. After the first operation of this kind in Switzerland, the baby—a boy—came into the world healthy, on April 13.

Worldwide, only 17 similar cases have been described, and results so far have been mixed.

This medical first would not have been possible without the close collaboration of the teams from the two­ Swiss university hospitals, pioneers in this highly specialised field of medicine. The collaboration is a model for operations of this kind, allowing the sharing of both knowledge and technology for the best possible patient benefit. It seems lasers have become a useful tool for piercing the famous cultural barriers between different linguistic traditions in Switzerland!­ 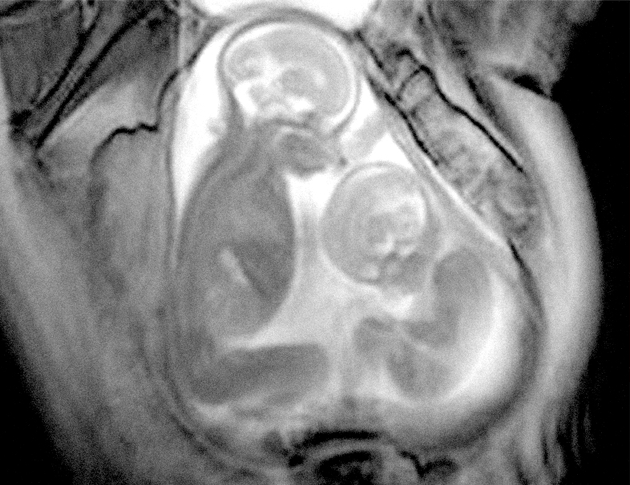 Twin-to-twin transfusion syndrome occurs in monozy- gotic twins – identical twins who share the same placenta – at any time during the development of the two foetuses. “The condition develops when most of the blood supply flows from one baby to the other and is caused by an abnormality in the placental blood vessels,” says David Baud.

“The effects are dramatic. One of the babies becomes ’obese’ with an over-developed bladder
for its age and an under-developed heart, while the second baby becomes small, shoved into a corner of the mother’s stomach by the amniotic membrane.” The procedure involves burning the vessels respon- sible for the flow imbalance to restore normal blood supply between the foetuses and the placenta. “The main difficulty is choosing the best point of entry using imaging and based on our experience,” says David Baud. “If you’re successful, you easily find the blood vessels around the umbilical cord, and the babies are not subject to too much strain. However, if you miss your entry, prepare yourself for a long and laborious procedure.”